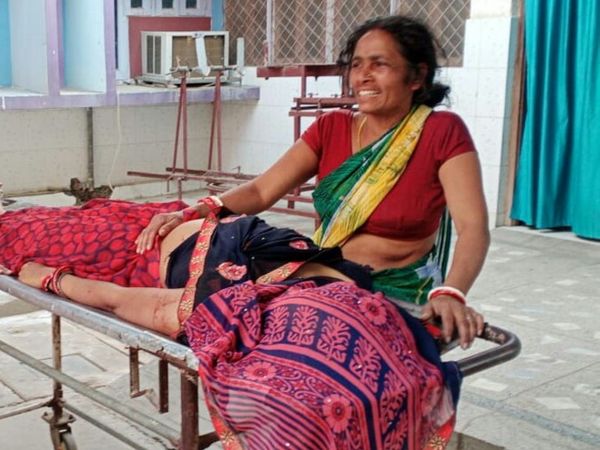 Crying family members after the incident.

A woman died in a road accident near TNB College in Bhagalpur, while her innocent son is in critical condition. The woman was going to the market on a bike with her husband and son on Monday afternoon. He had to buy shoes for his son. Meanwhile, in the Scorpio coming from near the college gate, the handle of the bike was closed, due to which the bike was uncontrolled and overturned. The woman and her son fell on the road, when the tempo coming from the front escaped, stumbling them both. The locals got the woman and her son hospitalized in a hurry. The woman succumbed during treatment.

The deceased has been identified as Pooja Devi, 25-year-old wife of Pankaj Kumari, a resident of Bari police station area, while 6-year-old Harsha is seriously injured. Here, the police reached the hospital as soon as the incident was reported and took information about the matter from the relatives. According to the police, the body has been sent for post-mortem. The search for the tempo driver is going on. Further action is on in the case.

Family members say that Pooja was going to buy a shoe for her son Harsha after returning from her aunt, when the incident happened. Pooja had a deep injury to her head due to a collision of the tempo, after which she lost her life during treatment. Harsh has a ruptured head and a hand injury. Local people told that the administration should take this matter seriously. Any effective steps should be taken to curb the tempo of running unbridled in the city. Also, provide appropriate compensation to the relatives of the deceased.