Sheikhpura triple murder case: 8 convicts sentenced to life imprisonment by court; Each one was also fined, Holi was played with blood and not color 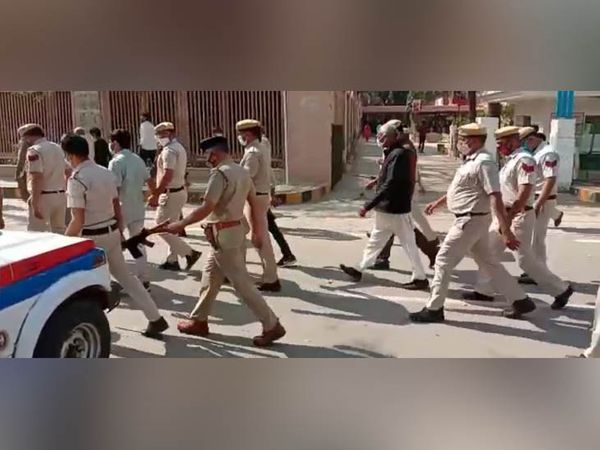 The police team takes 8 people convicted in the case to court for sentencing.

Eight people convicted in the famous triple murder case of village Sheikhpura in Hisar district, Haryana, were sentenced to life imprisonment. Along with this, each convict was also fined Rs 42000- 42000. The two convicts will have to pay an additional 2000 and 5000 fines separately. The decision was pronounced amid tight security arrangements. The police administration was very cautious about the decision and two additional police companies were stationed at village Sheikhpura. SHO and garrison incharge had camped in the village on Thursday night itself.

Significantly, there was a long-running dispute between the DSP Bhagwan Das faction and Balbir Pradhan faction in the village over Sarpanchi. Sometimes Panchayat elections and sometimes to accuse the Mahant of Dera Baba Rajunath. There was a long feud between the two groups. In March 2017, comrades Ramkumar Kasana, Mukesh and Pradeep Fauji were shot dead by Subhash Gurjar and his comrades in Sheikhpura on the day of Fag. Four people including two sons of Ramkumar were also injured in the attack.

After this, a case was registered against 26 people including DSP Bhagwan Das, Subhash Gurjar on the complaint of Sanjay Kasana. Out of these 23 people were nominated. At the same time 3 other people were unknown. 15 accused were thrown out during the investigation. DSP Bhagwan Das was transferred to Panchkula. Where he shot himself with his own service revolver by writing a suicide note in his quarters. The treatment died 15 days later.

Therefore, Panchkula police registered a case against 16 people of Balbir Pradhan faction based on the suicide note of DSP Bhagwan Das. At the same time, on 3 March 2021, 8 people were convicted by the court in the case of the already running Bhagwan Das faction. 2 accused Ashok alias Kala and Suresh were acquitted. The convicts include Subhash, Sandeep, Ashok, Ajit, Umaid, Daleel, Ramphal and Krishna. Of these, two convicts Subhash have been fined Rs 2000 and Sandeep Rs 5000 extra.

Woman’s corpse in hotel: 25-year-old woman, who came from Kolkata to do cantering work, hanged on the roof of the hotel, no suicide note was found