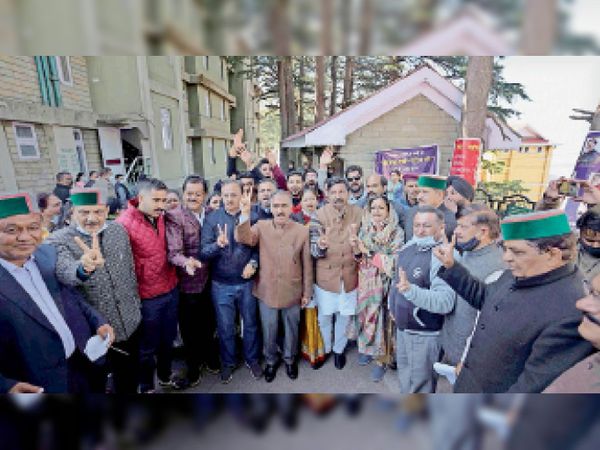 Congress MLA outside the Legislative Assembly after withdrawal of suspension.

The ongoing stand-off between the ruling party and the opposition during the budget session of the assembly finally broke on Friday after 5 days. The suspension of 5 members of the Congress was revoked following a meeting between Congress members, Parliamentary Affairs Minister Suresh Bhardwaj, CPI (M) member Rakesh Singha, along with Assembly Speaker Vipin Singh Parmar. After a conversation with the Speaker, the opposition members again came to the House.

Parliamentary Affairs Minister Suresh Bhardwaj moved the House to repeal the suspension of five suspended Congress leaders, Leader of Opposition Mukesh Agnihotri, Harshvardhan Chauhan, Sundar Thakur, Vinay Kumar and Satpal Raizada, in the context of contempt of Governor’s address. It was passed by the House.

Suresh Bhardwaj said that democracy runs from both the sides and the opposition and it is also necessary to have both in making any law. He said that on the instructions of Chief Minister Jairam Thakur, he is proposing to repeal the suspension of the five MLAs in the House. He said that the events which took place after February 26 have been resolved through negotiations.

Many people including Rakesh Singha have contributed to this. Congress member Asha Kumari welcomed the proposal. Colonel Dhaniram Shandil said that the end of every battle is on the table and the same happened here. After discussion, the House accepted the motion to repeal the suspension brought by the Minister of Parliamentary Affairs.

Solution to the dispute is only through dialogue: CM

Chief Minister Jairam Thakur, expressing happiness over the end of the deadlock within the House, said that it has been the tradition of the House that the Opposition should sit face to face. He said that it is necessary for both to sit in the state’s interest and said that ideas may be different, but they are not enemies of each other. He said that forget what happened and move forward.

The Chief Minister said that on the Governor’s address, the Opposition had an opportunity to speak against the Government, which he lost. But there are more opportunities. He said that as much as the dispute is resolved through dialogue and today such situation has come and they welcome the opposition members when they come to the house.

Robot sales in Japan up by 30%: Demand for robots up to Rs 1.70 lakh is increasing, because – people prefer to leave partners and talk to robots