Car parked, wheels missing: Thieves carried around the car of Municipal Corporation's ExEn from the posh area of ​​Panipat 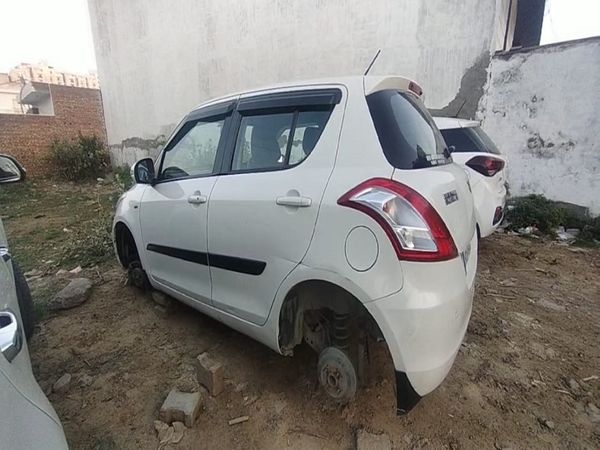 Municipal corporation ExEn’s car, from which the wheels were stolen.

This is important news for those who park outside the house. In Panipat, thieves have now started stealing wheels along with car-bikes. The four thieves of a car parked in an empty plot next to the house of the Municipal Executive Engineer (ExEn) in Model Town in the city’s posh area. When the ExEn reached the car to go to office in the morning, all four wheels were found missing. He has filed a case against unknown thieves at Model Town police station.

Rahul Poonia, a resident of Virat Nagar is an ExEn of Municipal Corporation in Jind district. He said that he parked his Swift car lying vacant at home. On Tuesday morning, when he approached the car to go to the office, all four wheels of the car were found missing.

The car was parked on bricks instead of wheels. There was no damage left in the car, but at night the thieves took away the wheels of the car. He reported the matter to the local police. They have demanded police to increase night time patrol. Police checked the nearby CCTV cameras, but the thieves did not appear in the footage. Now police are searching for thieves in other cameras leading up to the ExEn home.

CM’s E-bus strings deteriorated: The bus running behind Nitish suddenly stopped, then broke the railing of the Legislature while returning