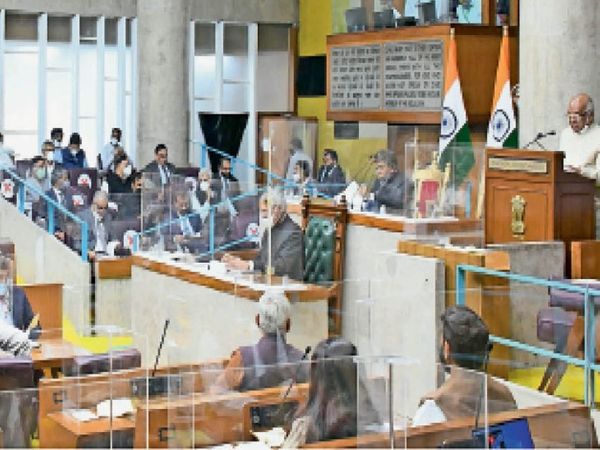 The BJP-JJP coalition government has prepared a roadmap for the development of the state for the year 2021-22. The government has placed agriculture and farmers at the top. The budget session of the assembly began with the address of Governor Satyadev Narayan Arya on Friday.

In the address, the government said that 9 crops are being purchased in the state at the minimum support price. There are plans to open 4 new Ayurvedic dispensaries in the state along with approved medical colleges in the state. At the same time, under the housing scheme, 20 thousand EWS houses will be built in Haryana.

The government has prepared a plan to save the water of Yamuna and use it in irrigation during the monsoon. It will cost 1000 crores rupees. Rehabilitation of Parallel Delhi Branch, Water Promotion Canal, Jawaharlal Nehru Canal, Hansi Branch will be done under this project. Similarly, a project worth Rs 500 crores has been approved for use of treated water in irrigation. This plant of 338 million 85 lakh MLD capacity will cost 500 crore rupees.

At the same time, 800 new buses will join the roadways fleet. 124 electric buses will be run. Has purchased 150 mini buses for women. At the same time, air services will be started from Hisar to Jaipur, Amritsar and Jammu. Earlier, condolence proposals of former MLAs, freedom fighters and martyred soldiers were also read in the House on Friday.

These schemes are also included in the agenda

16 departments turned profitable, loss of 11.14 crores due to power failure

State government enterprises are now beginning to emerge from the deficit. There are 27 government undertakings in the state. Of these, the government had invested in 23. In the report presented by the CAG, 16 undertakings have shown profit. This report is till September 2019. This has been revealed in the CAG report tabled in the House in the budget session. Apart from this, some companies have also raised questions on loans from high-interest institutions. Haryana State Roads and Bridges Development Corporation Limited did not submit advance income tax. It also had to pay an additional interest of 9 crore 9 lakh rupees.

On the functioning of Haryana Vidyut Utpadan Nigam Limited, it was written that generator transfer worth Rs 9.35 crore was purchased due to indiscretion at Panipat Thermal Power Station. DHVSN incorrectly calculated the work. This gave a profit of Rs 1.97 crore to the contractor. 53.15 lakh wire mis-purchases were made. UHBVN built unmanned sub-stations, but the operation was conducted in a conventional manner. In this case, there was a loss of Rs 11.14 crore. On the other hand, qualified bidders for Public Relations Agency in State Industrial and Infrastructure Development Corporation Limited were ignored. There was a loss of Rs 1.09 lakh on giving work to others.