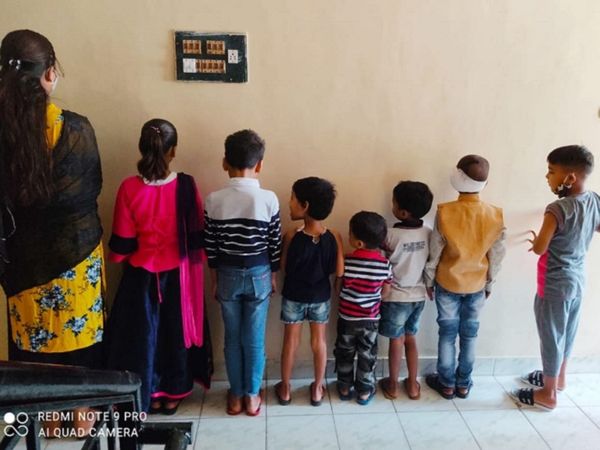 The afflicted children and their accompanying donors.

4 innocent people of Bihar need 20 units of blood in Vellore. If blood is found, the bone marrow is transplanted. Then, forever, come out of the clutches of the bloody claw i.e. Thalassemia. With the money, he reached Vellore for the operation but now donors are not available for blood. The family of the Masumeen of Bihar is asking for blood to save the lives of children in Vellore. 5-5 units of blood have been demanded from each child.

Brothers and sisters arrive for transplant after matching bone mine

He had a bone marrow match with the siblings of 4 innocent people. Subsequently, the Coal India Fund was joined with the Prime Minister, Chief Minister’s Fund for operations in Vellore. In this, Union Minister of State for Health Ashwani Choubey, PS senior IAS officer Kuldeep Narayan and Amit Aggarwal helped a lot, after which the expectation for the innocent was increased. Now in CHCH Vellore, the siblings of the victims of the operation have arrived for a bone marrow transplant. These children had to have blood transfusions every 15 to 20 days to live. After the bone marrow transplant, he will be able to live like normal people. The bone marrow of these four thalassemia victims is going to be transplanted. The four children are going to donate their merry siblings to Bon Mero. The pre-operation investigation is still underway.

Rahul Kumar, a resident of Sitamarhi, is suffering from Thalassemia. His brother Girdhar Kumar is donning bone marrow. Rahul needs 0+ blood. Father Ranjit Kumar is appealing to the people, if blood is found then his innocent son will beat Thalassemia forever. Rahul Kumar’s hospital ID is 524622H. Helping father can contact Ranjit Kumar on mobile number 7277090737.

Innocent Vishal Kumar, who lives in Vaishali, is saving the life of his sister Ayushi. She is going to give new life to Vishal by donating a bone marrow. The blood system is not available in Vellore. Vishal Kumar’s blood group is A + and the hospital ID is 733471H. Father Jai Prakash Rai is pleading for the help of blood. Jai Prakash Rai says that he is not getting any donor in Vellore. If found the donor, his son will get rid of Thalassemia forever. He has approached the helpers on mobile number 8809360252 and demanded to donate blood.

Yasin Sheikh of Gaya is suffering from Thalassemia. Sister Sara Praveen is trying to get rid of Thalassemia forever by donating her bone marrow. But there is a problem with not getting blood. Yasni’s blood type is B +. The hospital ID is 592624H. Yasin’s father, Raisuddin Shaikh, says that if someone contacts him on his mobile number 8055483109 and donates blood, his son will beat Thalassemia forever.

Sister Nausheen will give bone marrow to Sheikh Tausif

Sheikh Tausif will be donated by his sister Nausheen B Bone Marrow. His blood type is B + Positive. The hospital ID is 590465H. Father Ramadan Sheikh says that if blood is arranged then his innocent child can be liberated from the difficulty of keeping blood alive every 20 days. After the bone marrow transplant, their baby would be completely normal. Ramadan says that anyone can help by calling his mobile number 7693983648. If 5 units of blood will be arranged, then the bone marrow of the child will be transplanted.

Every month bites for blood

The life of innocent people caught in the blood claws of Thalassemia rests on external blood. Every 15th day the family wanders for blood. If the system is not in place, then clouds of crisis start looming over life. During the Corona period many innocent lives ended due to Thalassemia. Purnia’s 4-year-old innocence is a sign of this. There are many families in Bihar who break up every day in concern of the innocent. The dream of 38 innocent people of the state becoming like normal children is now coming to a close. Of this, 4 have reached Vellore for the first operation.

The effort made a year ago brought color

Maa Vaishno Devi Seva Samiti set up a camp for children suffering from thalassemia in Bihar on 23 February 2020 in Patna. In this, the victims were made to match their siblings with bone marrow. There were about 350 victims in the camp, in which 38 of them matched their siblings with bone marrow. Now he was waiting for help, with which the effort of Jai Maa Vaishno Devi Seva Samiti was going on.

Children suffering from Thalassemia whose bone marrow matches their siblings are then operated on. For this, there are few selected institutes in the country, of which Vellore is prominent. It costs a lot. 5 lakhs are provided by the Central Government and 5 lakhs are also received from the State Government. 200 children of the country were assisted by Coal India for the operation of 10-10 lakh rupees which is closed after 31 March 2020. For this reason there was a problem in the operation of the children. Families were also not the ones who could bear this huge expense. The mother Vaishno Devi Seva Samiti made continuous efforts in this direction and now Coal India gave its consent on 10 February. In this sequence, 4 children have reached Vellore for the operation.

Government increased the amount of help

The state government used to pay 5 lakh rupees for the operation of children suffering from Thalassemia. Mukesh Hisariya of Jai Maa Vaishno Devi Seva Samiti has made considerable efforts in this direction. After presenting the matter in front of CM Nitish Kumar in public dialogue, now the victims are being given 6 lakh rupees instead of 5. After the efforts of the committee, Coal India has again helped. Now, the expectation of 38 families of victims of Bihar to be normal is increased.

Vellore has been sent to help the victim families

On behalf of Jai Maa Vaishno Devi Seva Samiti, awareness is being sent to such families for treatment of Vellore whose bone marrow was matched. Mukesh Hisariya of the committee said that after the efforts, the victims’ families have been sent to Vellore.

According to Dr. SP Rana, Thalassemia is a disease that usually takes the child from birth itself. It is of two types, one minus and the other major. Children who have minor thalassemia lead an almost normal life, but if major, they have to give blood every 21 days after the month. Red blood cells do not form in children due to thalassemia. Even after giving blood every month, the age of the children is not very long. The whole family suffers with such innocents. In Bihar, more than 4 thousand families are facing this sting. Every month they have to struggle for blood. However, the first day care center of the state has been built by the Government of Bihar at PMCH and there are preparations to build four new centers. Blood is also given free of cost, but the family has difficulty in arranging it.

If you get tested before marriage, then the future will not be spoiled

Doctors say that Thalassemia is a hereditary disease. If the parents have symptoms of thalassemia in one or both of them, then this disease can pass in children. In order to save the future from this bite, it would be good if the child gets the necessary test done before planning or before marriage.

This investigation is also necessary with the horoscope

Thalassemia minor is dangerous. If both husband and wife are minor then there is an increased risk of thalassemia in children. This can be avoided in a check of only 400 rupees. Founder of mother Vaishna Devi Seva Samiti, who works for Thalassemia victims, says Mukesh Hisariya, HBA2, investigates for only 400. This test can reduce the risk of thalassemia. For this, he has written a letter to the Prime Minister saying that in issuing the marriage certificate, a column of the report of this inquiry should be kept. A certificate of dispute should be issued after taking the investigation report of HBA2 from the couple. Doing so will end the process of punishing innocent people without any fault.

Life lost in selfie affair: Selfie was taken while boating in Solapur, the whole family fell in the river due to sudden boat capsize, father and son died