John Abraham's 'Satyamev Jayate 2' is being made on the issues of farmer suicides and his movements, the main song of the film shot at the Ganges Ghat in Benares 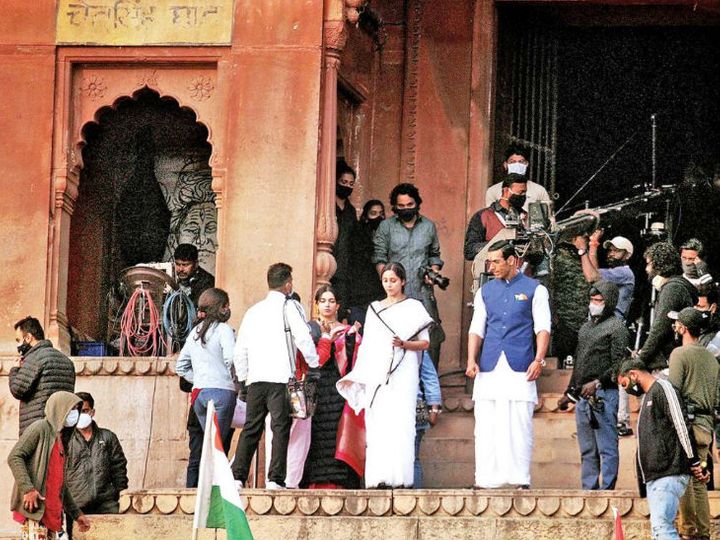 Actor John Abraham is currently shooting for his film ‘Satyamev Jayate-2’ in UP. People associated with the production of the film told that, this film is mainly devoted to farmer suicides and their movements. There are also strings attached to this film’s story with corrupt politicians and their various scams. They are subplots of the main story. So the film’s major sequences are shot in Benares.

A member of the unit on the set said, “John Abraham has shot the film’s important song in Banaras in a Khadi jacketed getup. He plays a social activist in the film, who is also associated with a political party. It stars Vijay Kumar and Rajendra Gupta as the farmer. John Abraham has become a youth to bring them justice. It also has a sense of nationalism. In the film, he also opens the poll of many corrupt leaders. At the same time, he is sorry for the fact that India is an agricultural country, yet why the condition of most of the farmers here is so bad. John’s character runs a campaign to improve the condition of the farmers in the film.

Song sequence has been shot on the Ganges Ghat of Banaras
Sources said that the song sequence of the same campaign was shot at the Ganga Ghat in Banaras. It is choreographed by Adil Sheikh. This song starts like a satyagraha. In this, the farmer’s community and the general public also support John. Before Banaras, the film was being shot continuously in Lucknow. There are portions of state politics and lessons taught to corrupt politicians.

In the second part too, John’s action level will be very high
When the film’s director Milap Jhaveri was asked whether the film does not have the action and action for the typical fans of John Abraham? On this, he said, “There is three times more action here than the previous part. There John only tore the tire and crushed the cellphone with his hand. Here you can guess how high John’s action level will be in the second part as well. “

John’s Upcoming Projects
John’s close friends also told him about his upcoming schedule. He said, “In January, he will first start shooting for ‘Pathan’. Then in February, Mohit will complete Suri’s ‘Ek Villain 2’ in Mumbai. In April, he will again fly to Abu Dhabi for the next schedule of ‘Pathan’. In addition to ‘Satyamev Jayate’ and ‘Ek Villain’, John was also the sequel to ‘Sarfarosh’, but later he did not do it. In such a situation, director John Mathew Matthan will now approach Ayushmann Khurrana and Rajkumar Rao. He also agrees to bring Vicky Kaushal on board. John Mathew explained the reason for this and said that my lead actor should take 26 years. If all three names are weighted then they will look the same. In the film, this character will be seen teaching the Khalistanis a lesson.

From Meena Kumari, Parveen Babi to Divya Bharti’s death, the lives of these film stars were full of tragedy